The Metro Railway or the rapid transit railway system is one of the best ways of commuting- it is fast, it is affordable and causes the least environmental pollution. The Mumbai Metro first started operating in 2014 and Line 1 extends from Versova to Ghatkopar. The other lines are all under construction or have been approved for construction and will start operations in due time. However, the point is, that once work on the Mumbai Metro started, the areas through which the lines will ultimately pass, attained prime status as coveted residential zones.

According to several reports, out of the 233 Kms of Metro Railway Corridor in the state of Maharashtra, 163 Kms is in Mumbai. The Colaba Seepz Corridor, the Dahisar- Mandale corridor, the Wadala- Kasarvadavli corridor, the Dahisar- Andheri East corridor- all these areas are now under the radar of the developers for real estate development. This is why several under construction projects in Mumbai are coming up near these metro corridors.

This is a natural development in spite of various restrictions placed by the MMRDA and State government on development along the metro corridors. Builders will now have to submit project plans and obtain permission for their projects which fall between 50 meters on both sides of the metro railway tracks.

Taking a look at under construction projects along key metro corridors

Under construction projects in Mumbai South

Several projects are coming up in areas like Gurgaon, Agripada, Tardeo, and others. The Line 4 and 7 of the Southern Extension of the Mumbai metro railway network will pass through these areas and hence the flurry of development here. Some of the major offerings in this stretch include Hubtown Ackruti Aditya, Neumec Crescent Aria, and Nathani Heights. 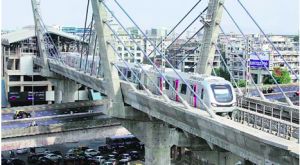 In the same way, there are projects being built in and around the Bandra-Kurla Complex which is one of the prime residential areas in the city and also houses the National Stock Exchange, the offices of the Consulate General of the United States and the British Deputy High Commission. The area is well linked to the IT Hub/ SEZ and there are a number of schools, colleges and multispecialty hospitals in the region.

Areas like Goregaon, Versova, Malad, Andheri, and Borivali are also benefiting from a slew of under construction projects. The Metro 2 from Colaba-Bandra–Charkop will be operational here from 2020. The Mumbai Metro Line 2A from Dahisar-D.N. Nagar is under construction in this region as well as the Colaba -Bandra-SEEPZ corridor.  Projects like Hubtown Palmrose, Kanakia Spaces Park, Ruparel Optima, Oyster Living Club life, JC Horizon, and many more prime projects are coming up in this part of the city.

Pre-launch projects in Mumbai in 2018

There are several pre-launch projects near metro corridors and some of these include prime offerings like Lodha Splendora, Runwal My City Phase II, Rustomjee Urbania, Kanakia Powai Phase II, Arkade Earth, and many others. Bookings are already on in full swing for these projects and once the Mumbai Metro lines are fully operational in a couple of years, commuting will be a breeze throughout the city.

This site uses Akismet to reduce spam. Learn how your comment data is processed.

Gardening is an art. It’s so much more than simply watering dirt and ensuring 2-4 hours of direct sunlight. Each...